An international fraternity with approx. 10,500 friars in over 100 countries.

Our works are an expression of who we are.

We are a Catholic religious order of priests and brothers committed to living the gospel of Our Lord Jesus Christ. Inspired by the life and writings of St Francis of Assisi, we strive to authentically live a life of prayer, fraternity and ministry as brothers in simplicity, humility and joy.

The Capuchin friars in Australia 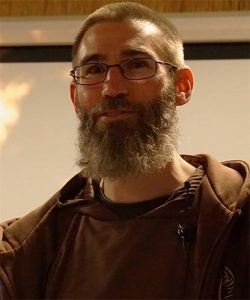 After making a contribution to the pioneering days of the Church mainly in the Diocese of Armidale, the Capuchins came to Australia following the Second World War to establish the Order.

They took up work among the post-war European migrants and began the formation of those who came to join the Capuchins.

Today the Capuchins live in fraternities in Sydney, Melbourne, Brisbane and Adelaide. They undertake various works of evangelization (proclaiming the Gospel) including parish activity, assistance to migrants and other apostolates.

Learn more about our work 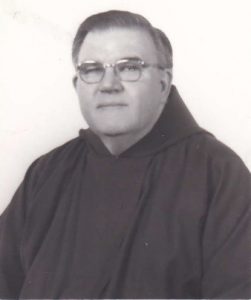 JAMES AUGUST “VINCENT de PAUL” RYAN (1) was born in Sydney on the 12th July 1923, the first son of Vera and James Ryan. He was educated by the Christian Brothers.

The Capuchins had arrived in Sydney in 1946. On November 4th there was a Civic Reception held for them in Leichhardt Town Hall. Two years later James August Ryan “Vincent” joined the Capuchins and was sent to New Jersey to do his novitiate. He was Perpetually Professed on the 24th July 1954. He did his studies in the Province of Pennsylvania at Capuchin College Washington DC.

When his studies were completed he returned to Sydney, where he was ordained by Cardinal Gilroy, on the 30th July 1955, in St. Mary’s Cathedral; Fr. Vincent De Paul Ryan was the first Australian Capuchin.

From 1962-1991 he was in charge of and responsible for the Seraphic Mass Association and Capuchin Mission Office, which he started, modelling the office on that of the Pittsburgh province.

He had a heart attack on the morning of 5th December 1991. His funeral at St. Fiacre’s Church in Leichhardt was presided by the first Capuchin Bishop of Mendi, Bishop Firmin Schmidt OFM Cap.

(1) This life story can be found in the Necrology of Friars who have worked in the Province of Australia, Handbook of the Capuchin Franciscan Friars of Australia 2003.

“The pilgrim Church is missionary by her very nature” (Vatican II, AG 2)

The Mission Office of the Province of the Assumption is located at 96 Catherine Street, Leichhardt NSW. We seek to develop and promote:

“My past, O Lord, to Your mercy; my present, to Your love; my future to Your providence.” St. Padre Pio

The promotion of the cult of St Padre Pio is carried forward in the spirit of article 51 of Lumen Gentium (Vatican II). We seek to develop and promote the knowledge of and devotion to Saint Padre Pio as one of the modern Capuchin saints. Through this work, the Capuchin charism becomes better known.

We maintain a close working relationship with Padre Pio Centre, San Giovanni Rotondo, Italy; our primary source for devotional material; it produces printed matter in various languages. It is a source for news updates on ways devotion to St Padre Pio is being promoted throughout the world.

The office will be closed for the month of January.  Orders placed during this time will be processed in February.

Thank you for supporting the Capuchin Friars.
Have a blessed Christmas and a Peaceful New Year!
Christmas Trading Hours